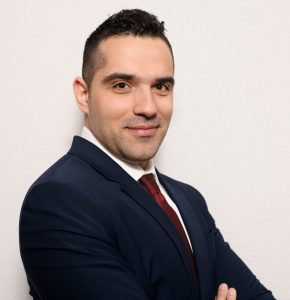 We asked Fadi Yousef, an eloquent and perceptive trial attorney in the law office of Rob Wiley, P.C., to produce his candid answers to a range of questions. After reading, you will be more abreast with the understanding and knowledge Mr. Yousef holds.

1. What do you think is the most important part of a good case?

Evidence and credibility. Those two are closely related and equally important. You can have all the evidence in the world, but if you lack credibility, you will have a hard time convincing the jury to rule in your favor. On the other hand, if your credibility is exceptional, you can have a great case even if the only evidence you have is only your own word.

2. Besides Rob Wiley, P.C., what is the most interesting job that you have had?

When I was in high school (I was living in Syria at the time), I had a summer job at an Iraqi newspaper that published in Syria. It was a unique experience because not only did I learn about the newspaper business, but I also learned a lot about Iraq, Iraqis, and the Iraqi culture.

3. If you were not practicing labor and employment law what would you be?

5. What do you do when you’re not practicing law?

Outside of work, I am either watching TV, exercising, or reading non-fiction. I enjoy learning about science, like physics, astronomy, and biology.

6. How would you describe the color yellow to someone who could not see?

Yellow represents warmth and the feeling of security and confidence.

7. If you could argue any case in history, what would it be?

Korematsu v. United States. In 1944, the Supreme Court allowed the exclusion of Americans of Japanese descent into concentration camps. Astonishingly, this case remained good law until 2018.

8. What do you most admire as a lawyer?

The First Amendment of the Constitution of the United States, especially the Freedom of Speech.

No, and I wouldn’t trust anyone who claims to always win. I do, however, always do my best efforts to win.

My least favorite part of practicing law is having to sometimes deal with lawyers who constantly try to hide the ball. As lawyers, we are officers of the court and we should always conduct ourselves accordingly.