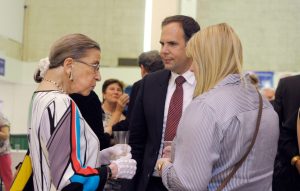 I was fortunate to meet Justice Ginsberg in 2013. I met her not as a justice, but as my professor. My alma mater, Tulane Law School, hosts an annual summer program abroad.  Among that year’s professors was Justice Ginsberg. Although I had long since graduated from law school, Tulane allowed alumni to enroll in the program. It was an opportunity I could not pass up.

I expected that the program would be entertaining and interesting, but I never expected the lesson Justice Ginsberg would teach me.

Justice Ginsberg gave three lectures. She took her job seriously, writing completely new lessons that incorporated Supreme Court decisions decided just months before. It was her lesson on “implicit bias” that taught me something I never knew before.

I have often heard academics and practitioners discuss implicit bias. But it was Justice Ginsberg, I mean Professor Ginsberg, who finally explained it in a way that I could understand. Implicit bias is the unconscious bias that we all have. It may even be bias that we are not aware of.

Justice Ginsberg explained that she and her late husband had always loved going to the symphony. No matter where they lived, they always bought season tickets to the symphony of that city.  This was true since Justice Ginsberg was in law school. At the time, the prestigious symphonies of Boston, New York, and Washington, D.C. shared a similar trait. They were all men. No woman had been admitted to the symphony.

After further discussions, the women’s rights activists made a proposal: Why not have prospective symphony members audition behind a curtain? Then the applicants could be heard, but they would be anonymous.

Well, lo and behold, when everyone auditioned behind a curtain, symphonies started hiring women left and right. When selectors did not know the sex of the musician, and were deprived of their implicit biases, the glass ceiling shattered.

Justice Ginsberg shared that she had recently given a similar talk at a law school. Afterwards, a young woman came up and told Justice Ginsberg that she herself was in the symphony. She shared that even in modern times, she had auditioned behind a curtain. And then she said something that the Justice did not know. That today, women not only audition behind a curtain, they also take off their heels so their footsteps don’t give them away.

That lecture taught me to understand implicit bias, that it is both very real and very difficult to overcome. It was also a powerful demonstration of Justice Ginsberg’s ability to be an effective and persuasive educator.

Her final lecture, in which she was joined by her daughter Jane, herself a law professor, was her most personal. Justice Ginsberg shared her own story of trying to find a job after graduating from law school. She read employment ads from law firms at the time to us. They said things like, “Wanted, legal secretary. Must be between the ages of 20 and 29 and unmarried.” We were appalled.

One of the gifts that Justice Ginsberg bestowed upon us is that it is almost inconceivable to think of a time in which such overt sexism was in any way acceptable. But it was into this hostile work environment that Justice Ginsberg went searching for a job as a lawyer. She applied to seventeen firms, all of which rejected her. Only after one of her professors personally interceded, insisting to a connection that he simply must hire this student, did Justice Ginsberg get her first job.

At the end of each lecture, Justice Ginsberg answered every question. Every hand that went up got called on until there were no more questions left to be answered. It is often said that Justice Ginsberg had exceptional relations with her fellow judges, including those who were conservative (most famously, Antonin Scalia). I’m sure one reason for her success, in addition to high intelligence and natural charisma, was her ability to educate and to teach.

Afterwards, the Paris office of White & Case, a global law firm, hosted a reception for Justice Ginsberg. Held in a former palace, it was decadent. I can’t even guess at the price of the champagne that I availed myself to liberally. But the glitz and glamour did not faze Justice Ginsberg (who also enjoyed the champagne). In introducing the Justice, a partner praised White & Case’s pro bono (volunteer) work. Justice Ginsberg quipped that those who truly believe in equal rights should find real jobs as civil rights attorneys, rather than volunteer a few hours on the side. The comment was directed at the law students, but I gladly drank to that.

After Justice Ginsberg delivered a few tailored remarks, she again invited anyone with a question to ask it. One of the law firm’s associate attorneys had heard her comments from her lecture earlier and asked, “Was White & Case one of the seventeen firms that rejected you?” She looked the associate in the eye and said, “Yes. Yes it was.”

Justice Ginsberg overcame tremendous bias to became one of the most respected figures in our American government. Through her achievements, she leaves behind a world that is more fair and more equal. Her intelligence, drive, and charm will be sorely missed.